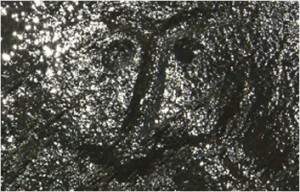 At the southern end of Kodiak Island, like gems hidden among the rocks of Cape Alitak, you can find petroglyphs carved into stone. These petroglyps are engraved images of faces, people, animals, spirals and shapes.

Sven Haakanson, the executive director of Alutiiq Museum, works to document these petroglyphs. You can watch short films about his work; start with FrontierScientists’ vodcast ‘The Appearing and Disappearing Petroglyphs of Cape Alitak’ (direct from FrontierScientists or on FSyoutube). If you visit Kodiak, Alaska, you can also admire Alutiiq Museum’s exhibit ‘The Cape Alitak Petroglyphs’. The stone carvings of Cape Alitak featured in the vodcast and exhibit are anywhere from 250 to 1500 years old. These petroglyphs are exposed to the elements and, though they are slowly being worn away by the sea, Sven’s ongoing research aims to document them thoroughly.

What makes these rock art discoveries–and their preservation through rubbings–important and exciting?  It’s the universality of the myriad faces, dancing people and whales. Preserved, they not only represent a portion of the rich cultural heritage of the Kodiak Island area but also remind us how similarities between human beings cross both time and cultural boundaries. The face carvings are reminiscent of the emoticons we see in internet- text communications today. Expressing mood and human features through symbols is an enduring tradition. 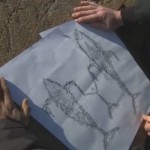 Picture: Shaman-hunter between whales, from vodcast ‘They Hunt Whales With Poison Spears’. Rubbing.

The carvings frequently look cheerful, even whimsical. Chipping away rock takes effort, and for a people to leave such approachable artwork carved into ocean-side stones is just one way in which the Alutiiq ancestors left evidence of their deep respect for the sea. Overlooking the waters off of Kodiak Island, the petroglyphs are heritage personified in art. As the vodcast points out, the petroglyphs make great inspirations for present-day artists, who re-imagine the past in their new works. These carvings represent heritage and a link to modern-day creativity; furthermore, the petroglyphs are a means of sharing stories.

My personal favorite segment of ‘The Appearing and Disappearing Petroglyphs of Cape Alitak’ is Sven Haakanson’s mention of Sedna, the spirit goddess. In the petroglyphs shown she is represented by a carving of a woman with holes through her hands. It is said that Sedna gathers animal spirits; some animal spirits pass back through the holes in her hands. Sven  interprets this as the message: “Don’t take more than you need.” Words to live by. 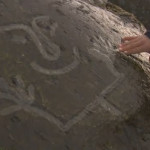 Picture: The spirit goddess Sedna, pictured with holes in her hands (carving overlaid in white for clarity). A similar petroglyph is found amongst Alutiiq Museum’s icons.

If you find mythology as fascinating as I do, consider reading the goddess Sedna’s story (search: Sedna (mythology)). There are a number of versions of this creation myth, all rather fateful and all genuinely interesting. Reading just one should introduce new concepts to your imagination. (…Ever wonder where sea creatures came from?) Sedna’s story is indeed a tragic one. After reading a version of the tale, you might wish to listen to Canadian singer/songwriter Heather Dale’s song ‘Sedna’. Yet another example of how Arctic traditions inspire beautiful cross-cultural artwork.

There are similar themes present in much of the mythos from all across the world. It is amazing. Much like the approachable faces among the petroglyph carvings, those echoing themes and the emotions drawn up by the wildly-diverse yet still somehow unified tales mean something: they show our shared human nature. The petroglyphs of Cape Alitak may be far from the place where you live, engraved on the stones of the last frontier long ago. The tales they tell and the human emotions they portray, though, might just hit delightfully close to home.