When Coral Chernoff begins to work on a project she goes to her metal file cabinet and finds what shes needs: seal parts, whale bone, bear’s bread, grass. Filed away where an office worker normally puts manila file folders and bits of paper is where Coral stores parts of Alaska, Kodiak Island, and her natural surroundings.

Painter Marc Chagall said: “Great art picks up where nature ends.”  Coral unknowingly follows this credo. She prefers to gather the materials she uses, cure them herself, and intuitively and conservatively incorporate them in the pieces she produces.  For example,  Sven Haakanson executive director of the Alutiiq Museum, with his daughter Eilidh, Andy Christofferson and Coral initiated a meat and seal fat hunt for Kodiak elders. 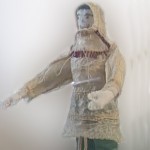 Later Coral used the seal parts in making one of her dolls. The seal skin boots are made from seal skin and seal tail for the bottom of the boots.  The parka is made from gut skin, the drawstring is deer skin, all fashioned similar to the traditional style parka.  The parka is stitched with thread made from sinew with a stitch that prevents water from leaking through, effectively making the gut skin parka waterproof. 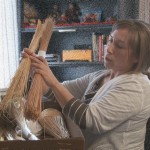 The difference between the two is visible to the untrained eye.  But to the weaver, the difference guides the weaving technique.  “The first blade,” Coral says, “is softer on the ends, it’s cushiony verses crunchy of the second blade.”  For the second blade, “I would have to dampen the ends to work with whereas the first blade is so soft already I can just start twisting them and probably weaving with them without dampening them.  Or, I could set them outside for half a day and they would absorb the moisture,” Coral adds.

Coral ventures in the two worlds of traditional and modern, practical and esthetic.  It’s strikingly prominent as she plays with costuming her dolls.  The hunter doll is traditional, the girlfriend doll is fantasy, and the fisherman doll is practical.

The artistry of Coral Chernoff holds over 300 years of traditional basket weaving and attention to the living environment.  Our appreciation of Coral’s work links us to our environment and our modern social structure, as well as helping us look back to where she and/or we come from.