A row of knotted grass can hold so many stories you’d be amazed.

Long grass or spruce root, yarn, sinew, even paint, all go into the baskets lovingly crafted in Alaska. Native Alutiiq weavers have carried on the traditions, but some techniques had been lost. -Had been.

In this vodcast by Frontier Scientists, learn how Alutiiq basket weavers from Kodiak Island discovered part of their ancestors’ lost past. Coral’s Basket Feat: Russian Inspired

Historically, Russian interaction with the Alutiiq Natives of Kodiak Island was rife with conflict. The Russians came to call the island the capital of ‘Russian Alaska’ until Kodiak was purchased by the United States in 1867 along with the rest of the Alaska Purchase.

For more than a century-and-a-half, the Russians had direct opportunity to acquire Native-woven baskets which would form part of the extensive collections now housed at the Russian Ethnographic Museum and the Museum of Anthropology and Ethnography in St Petersburg, Russia.

A number of Alaskan basket weavers from the Kodiak area, along with Sven Haakanson, director of the Alutiiq Museum, were fortunate enough to be granted the opportunity to visit those two museums and examine the baskets up-close-and-personal. They are the earliest collections of baskets from Kodiak in the world, and the weavers marveled at the quantity and quality of the baskets in the collection.

Because they were able to closely examine the baskets, even handling them- carefully, gloved and eager to see everything: knotting techniques and decorative ones- the weavers were able to learn from their skilled ancestors’ techniques. What luck!

With the knowledge the weavers already knew, and the inspiring workmanship of the preserved baskets, they learned information which they could bring back home to Alaska and share with the community. It’s all about preserving and passing on culture.

While they were visiting Russia, the excited weavers were even able to tell the museum curators more than they’d known, including what materials made up the baskets, how they were made, and the significance of the baskets in Alutiiq culture. They taught weaving classes to Russian curators and students, and were featured on Russian YouTube.

Back in Alaska, the Alutiiq Museum Archaeological Repository of Kodiak Island engages in efforts to teach Native Arts and Culture. They preserve customs, art-forms, and even the Alutiiq language itself! You can visit their website at http://www.alutiiqmuseum.org, and find more information on classes- not to mention enjoy photos- on the Alutiiq Museum’s Facebook page.

Starting their own grass or spruce root baskets, learning weaving techniques, basket-weaving students in Alutiiq communities create something tangible. They learn how weaving was done in the past and discover more about the history of old Kodiak, not to mention getting to form something lasting with their own hands!

Coral Chernoff, who creates functional yet beautifully decorated baskets, gathers and processes the materials for her projects with her own hands. She urges weavers to shape their basket “Into whatever it wants to be shaped into.”

Let your inspiration guide you. 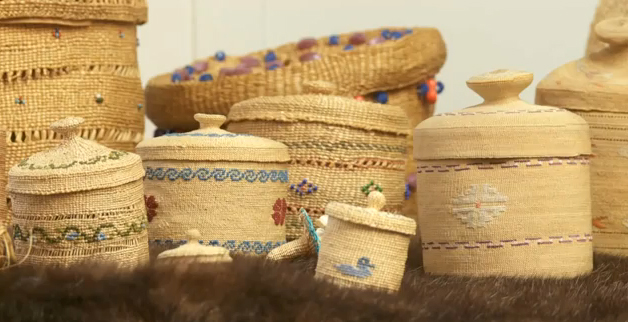