By Laura Nielsen for FrontierScientists.

“Earth really is our home.”

Astronaut Drew Feustel was part of STS125’s mission repairing the Hubble Space Telescope. His flight team had trained three years and flown into space, where they witnessed 16 sunrises and sunsets every day. They’d made five spacewalks over five days, each walk lasting 6 1/2 – 8 hours. Making repairs, swapping old equipment for new and replacing batteries in the vacuum of space was no easy task, but the astronauts ensured that Hubble- which returns glorious images of whole star-fields in space that we didn’t even know were out there- will last 5-15 more years. As Feustel described the sensation of exiting his spacecraft after a successful landing, though, he spoke of the wonder invoked by the smell of the California desert air: “Earth really is our home.”

He should know. Drew Feustel is not only an astronaut but a geophysicist. During his public lecture on Sunday, he spoke of the goal of exploration. Astronauts explore space, but they also explore the Earth from space. A big part of their training involves finding analogues between difficult environments on Earth and those we might one day face away from our home planet. So whether he’s visiting NOAA’s Aquarius Undersea Laboratory, studying the extreme Antarctic deserts of the McMurdo Dry Valleys, or high above the atmosphere, Feustel’s passion for exploration shows through.

Exploration is an aim shared by so many of the attendees at this conference. Exploration of our home. Advancing our understanding of the known universe. The tasks of a Frontier Scientist.

In May 2011, Feustel was part of STS134. During this mission astronauts aboard the Endeavour added the Alpha Magnetic Spectrometer to the already diverse components of the International Space Station, completing its assembly. Feustel called the construction of the ISS, which was made with interlocking parts (many of which were made in different countries and never mated while inside the Earth’s atmosphere), a testament to human engineering & ingenuity. You can see him in this photo- the astronaut on the right, just above and right of the AMS component. The Alpha Magnetic Spectrometer was put in place to search for the origin of Dark Matter, those mysterious charged cosmic particles which cannot be seen by human eye. 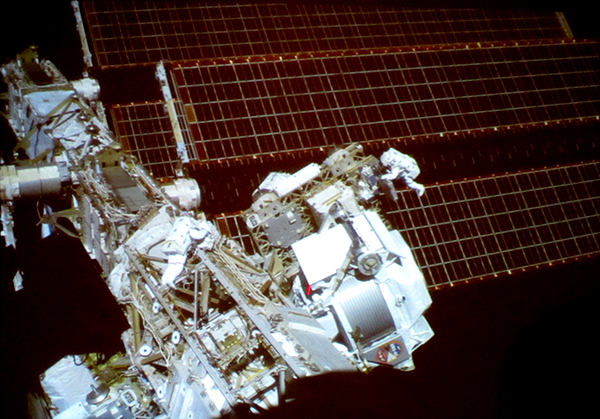 >> The rules for walking in space include: don’t let go, don’t break anything, and don’t make mistakes.

Astronaut Feustel is part of the human spaceflight exploration program, which is only one of the wide range of tasks NASA undertakes. Feustel reminds us that despite current funding challenges, we still have a viable and vital space program which continues to contribute to scientific advancement.

One of FrontierScientists’ vodcasts, ‘Volcano from Space’, is being reviewed at the S Factor Workshop. If you’re in SanFrancisco for the AGU 2011 conference, attend the workshop Tuesday 6 December 7:00pm-10:00pm in Moscone South, Room 300 – it’s free! Ten videos submitted by the AGU community will be reviewed by Hollywood filmmakers to reveal the methods behind effective videography. Or watch ‘Volcano from Space’ right here. When an astronaut aboard the International Space Station spotted an ash plume, he contacted the USGS-AVO Alaska Volcano Observatory to learn which volcano was erupting. Research Geologist Michelle Coombs recounts the tale. It’s just one in our series on Cook Inlet Volcanoes.

>> The atmosphere is a thin shell, a little layer, that covers the planet and protects us. “Earth’s space suit,” Feustel calls it. He says “It really is that fragile, there’s not a lot out there.” And that means we must protect it.