ANCHORAGE — On its way to deliver emergency fuel to Nome, Alaska, the Russian tanker Renda will move through an area used by wintering spectacled eiders, a federally threatened sea duck. But, to protect the ducks and their wintering habitat, resource managers from the U.S. Fish and Wildlife Service and navigators from the U.S. Coast Guard are using satellite telemetry information from the U.S. Geological Survey to plot a route for the tanker that minimizes impacts to this species and its habitat. 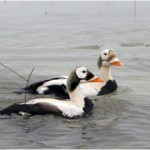 “Nearly 20 years ago, USGS biologists used the latest satellite tracking technology available at the time to uncover the mysterious wintering behavior of the spectacled eider, now a threatened species,” said USGS Director Marcia McNutt. “Little did these scientists know at the time that their information would be critical in allowing a Russian tanker decades later to thread the needle to Nome in order to deliver life-saving fuel oil without taking a toll on these elusive sea ducks.” 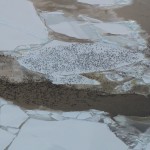 The arctic nesting sea ducks are now wintering south of St. Lawrence Island in the northern Bering Sea, where sea ice abounds and abundant prey in the form of clams and other invertebrates appears to be critical for the species’ winter survival.

“As stewards of the environment, we found the data invaluable to our mission planning and execution while protecting our nation’s critical spectacled eider habitat,” said U.S. Coast Guard Capt. Craig Lloyd, District 17 Chief of Response.

Satellite telemetry provides a way to track animals regardless of location, time of day, or weather. Transmitters send information to orbiting satellites, which relay the data to land-based receivers. 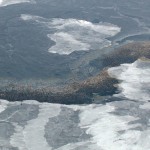 Implantable satellite transmitters were first used by USGS Alaska Science Center biologists in 1993 to discover the molting (when birds shed old feathers and grow new ones) and wintering distribution of spectacled eiders. At that time, no one knew where the species lived during the many non-breeding months. But, USGS tracking data and subsequent aerial surveys revealed that spectacled eiders wintered in the northern Bering   Sea, within the pack ice.

“Not only was this a surprise, but we’ve learned that about 380,000 spectacled eiders, or almost the entire population of this species, use this area every winter for five to six months; an amazing natural phenomenon in an incredibly harsh environment,” said Matthew Sexson, USGS biologist. 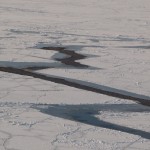 In 2008, USGS biologists began marking spectacled eiders with improved transmitters with longer life cycles to learn more about the species to help resource managers plan conservation actions and strategies. Each transmitter can last as much as two years, providing an opportunity to learn more about year-round migratory patterns and habitat use of this unique species, Sexson said. Between 2008 and 2011, 129 transmitters were deployed at nesting areas in coastal Alaska. The project is expected to produce continuous tracking data from 2008 through 2013.

“Protecting America’s fish and wildlife resources is a shared responsibility. It is satisfying to see agencies working together to protect threatened and endangered species, while meeting the needs of our communities,” said Ellen Lance, the Endangered Species Branch Chief for the U.S. Fish and Wildlife Service’s Alaska Region.

More information about this research can be found on the USGS Alaska Science Center webpage. One can also follow the research by subscribing to the research Twitter feed.