In the Aleutians, Walker while supporting Lowell Fritz, National Marine Fisheries Service, flew two UAVs: the Scout, a quadcopter, and the Puma, designed for Maritime operations, to assist the examination of sea lions along the Aleutian chain. Watch the videos FLY SCOUT FLY, FLYING TOOLS, and LEARNING TO FLY IN THE ALEUTIANS. These videos take you into Walker’s world of UAV research. 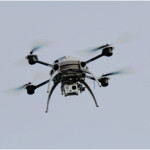 Wired magazine in the July 2012 issue acknowledged the University’s work inspecting BP’s gas flare equipment that burns off excess gas from drilling. Walker’s UAV spotted a crack in one of the nozzles while it was burning. The UAV inspection should have minimized down time and allowed the repair team to have required parts on hand before shutting down for the repair.

Fascinating video of current scientific discoveries in some of the Arctic’s most remote and dramatic landscapes are chronicled in short videos, Twitter feeds, blogs and web reports. The research covers these categories:

Frontier Scientists is funded by the National Science Foundation, with additional support from the National Park Service and 360 Degrees North. Follow us!