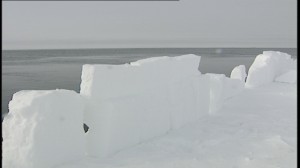 Fairbanks, Alaska, September 4, 2012 – Three videos introduce the oceanographic modeling work from the University of Alaska Fairbanks (UAF). The video Modeling Ice in the Arctic, shows a regional ice model coupled with a global climate model.  “The ice is not as stiff as it used to be,” said Kate Hedstrom, Oceanographic specialist from the Arctic Region Supercomputing Center at UAF.   “We’ve had discussions about how the nature of the pack ice is changing from being really solid and thick all multiyear ice to being patches of multiyear ice with the first year ice in between,” said Hedstrom.

The video Quinhagak Drifters was a cool collaboration with scientists and students from the town of Quinhagak, Alaska to study overlooked near- shore waters of the Bering Sea. “We were interested in knowing where river water that comes onto the Bering Sea Shelf goes and how it get there,” said Tom Weingartner, UAF Professor in Physical Oceanography.

Fascinating video of current scientific discoveries in some of the Arctic’s most remote and dramatic landscapes are chronicled in short videos, Twitter feeds, blogs and web reports.  The research covers these categories:

Frontier Scientists is funded by the National Science Foundation, with additional support from the National Park Service and 360 Degrees North. Follow us!