Video is the new tool for scientists needing to document research, explain a thesis, communicate scientific findings to the public, or just tell an interesting science story. This science storytelling workshop provides tips and tools from technology companies including Google Earth and GoPro Camera, professional video makers, and scientists with a passion for communicating science using video. The art of good science storytelling will be emphasized. The workshop will encourage interaction with presenters and provide a hands-on opportunity to experience the latest video tools and techniques used by both professional and amateur videographer scientists.

YOU ARE INVITED AND ENCOURAGED TO SUBMIT A SHORT TWO-TO-FIVE MINUTE SCIENCE VIDEO FOR THE PANEL TO REVIEW AND PROVIDE PROFESSIONAL FEEDBACK DURING THE STORYTELLING WORKSHOP. Guidelines for submission of a science video for workshop review are listed at bottom of the page. 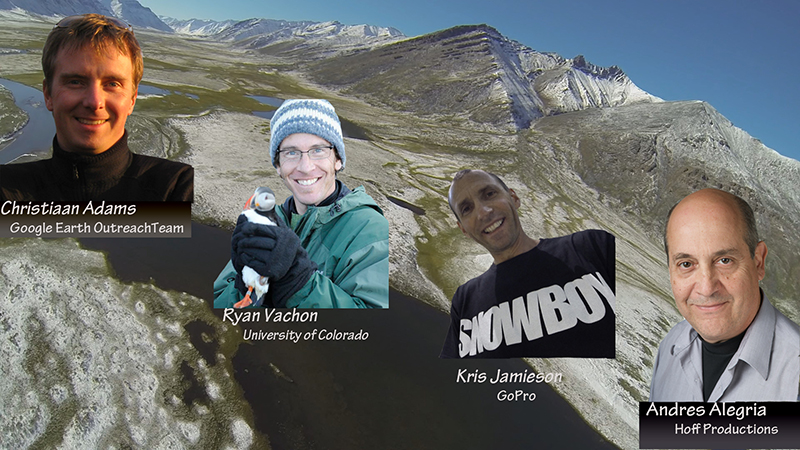 GoPro: Emerging technologies in pop-culture offer the scientific community tools to capture and share multi-media from the field. The GoPro video camera has proven itself as an affordable, durable and functional product for scientific exploration and study. Kris Jamieson, the Global Education Manager at GoPro, will share a series of scientific videos/photos, produced by professional and amateur scientists, using the GoPro Hero3 systems. He will demonstrate the simple techniques used to capture some of the most amazing video the world has ever seen.

Google Earth: Google Earth provides tools to enhance storytelling by placing your narrative in its geographic context and enabling you to easily create compelling data visualizations and fly-throughs over its rich satellite imagery. Christiaan Adams, Engineer and Developer Advocate with the Google Earth Outreach team, will highlight some of these tools and techniques for putting “geo” in geoscience, and ways to move your visualizations to video.

San Francisco Bay Area Editor/Producer: Andres Alegria began his career as a producer of news, documentary and cultural radio programming. He produced and hosted public radio programming for 10 years. He is a television editor and producer for over 30 years with credits that include national and local news, documentaries and nationally-syndicated programs for the major networks. In addition to producing independent videos, he is currently Vice President for Hoff Productions, one of premier producers of factual television programming in the U.S.

Scientist/Videographer: Dr. Ryan W. Vachon, Climate Scientist and videographer, University of Colorado. Vachon will dig in to how people with limited experience and budgets can approach video production. He will discuss important considerations of science storytelling such as where time is best spent and what does and does not work when you’re filming, and also share his experiences of turning ideas into videos.

–Films should be in English (spoken or subtitled)

Liz O’Connell for Frontier Scientists: presenting scientific discovery in the Arctic and beyond