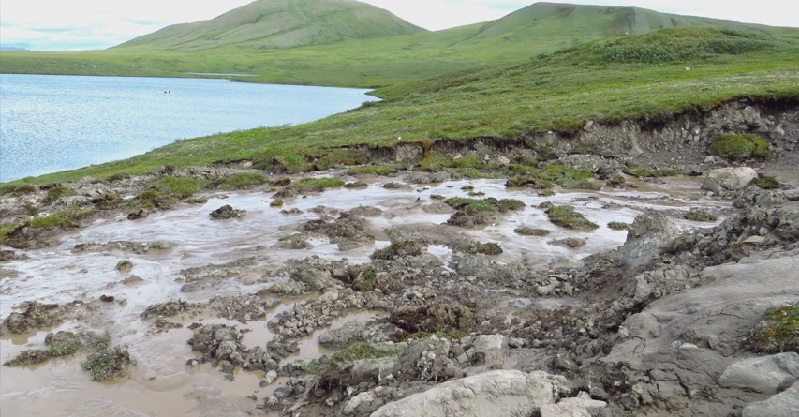 Jason Dobkowski stands on the shores of Wolverine Lake. His research site is located in the North Slope of Alaska, nestled near the remote foothills of the Brooks Range.

“I’m here studying permafrost thaw slump which is depositing silt and material into the lake behind me. And that material, the silt and the minerals and the frozen carbon, affects the lake in a lot of different ways. It can change the chemistry and the biology of the water and can have a huge effect on what happens to the carbon that was once frozen in the permafrost here as it thaws and gets reintroduced to the global carbon cycle.” ~Jason Dobkowski

Dobkowski, graduate student in the Department of Ecology and Evolutionary Biology at the University of Michigan, joined professor George W. Kling’s project at Toolik Field Station in Alaska researching a permafrost failure known as a thermokarst. Thermokarsts happen when permafrost feels the heat of rising temperatures.

Permafrost is perennially frozen ground, or ground that has stayed frozen for a minimum of two years. Its distribution is irregular; most occurs north of the Arctic Circle. Yet even in Fairbanks, south of the Arctic Circle and something like 560 kilometers [350 miles] south of Toolik Field Station, there is permafrost which has been frozen for the last several thousand years.

Permafrost provides the infrastructure of Arctic ground and thus governs high Arctic ecosystems. Plants cannot grow in the frozen soil and ice that composes permafrost. Therefore, all living plants in permafrost territory must grow on the active layer, the upper 30 to 100 centimeters [12 to 39 inches] of soil which thaws during the warm season but freezes during the long winter. Beneath the active layer, permafrost is an impassible barrier. Water from snow melt or precipitation cannot trickle through its bulk, and so it stays near the surface, moving via water tracks or atop the soil via small streams and lakes. That makes the Arctic tundra, which receives very little water overall, a habitat capable of supporting highly water-dependent plants during the growing season. Permafrost provides a stable base for this ecosystem.

Permafrost is not homogenous. It’s composed of a mixture of ice in formations like ice wedges, and of long-dead frozen organic matter: mostly tundra plants which froze during the winter instead of decomposing, but also the remains of ancient beasts like mastodons and steppe bison. All organic matter – all living and dead organisms – contain carbon.

Before the Industrial Revolution there were 560 gigatons of carbon in the atmosphere (1 gigaton = 1 billion tons). With additions since then, we’ve reached 760 gigatons. Frozen in permafrost waits an estimated 1,400 – 1,600 gigatons of carbon; twice as much carbon as that currently residing in Earth’s atmosphere.

Thermokarsts at the sites of failed permafrost

Thermokarst features are formed when melting ice and thawing permafrost cause structural failure within the landscape sparked by thermal change. Thermokarst refers to the uneven ground that results when soils collapse and settle unevenly after permafrost degrades and thaws; these events can result in gullies hundreds of feet across or long, and tens of feet deep.

Rising temperatures cause the ice structures in permafrost ground to melt. Frozen water takes up more space than liquid water, and so the loss of the ice destabilizes the permafrost. Liquid water pools at the bottom of large empty spaces underground where once there was ice. And water – now free of the ice – trickles and flows, further destabilizing the thawing ancient organic matter. The thawed permafrost fails, and shifts. On slopes, destabilized permafrost can cause massive land slides that move tons or even hundreds of thousands of tons of soil. On more level land the ground subsides, settling into empty spaces vacated by ice, forming sinkholes and massive depressions surrounded by unpredictable hillocks.

Water flows through these thermokarst features, encouraging erosion and making the thawed permafrost material move. Often, thermokarsts send organic matter and minerals sliding down the banks of a river or lake into water.

New streams and lakes form in the unsettled terrain, while other bodies of water might be drained because the water they held can flow into new-formed thermokarst depressions. Sometimes landslides overwhelm and block existing streams, cutting off and redirecting water flow.

Hillslope failures tumble massive amounts of sediments and nutrients into water, coating stream- and lake-beds with thick silt unfriendly to foraging fish, flooding ecosystems accustomed to a small amount of nutrients with enough food to nourish armies of algae – but only for a limited time. Water that begins in the Brooks Range foothills will travel subsurface, to streams, to lakes, to rivers and eventually to the ocean. These thermokarst events can have a widespread impact that begins in headwater stream ecosystems and reaches all the way to the sea.

At Wolverine Lake, Dobkowski is thinking about those impact as he collects dirty brown/gray water leeching from the thermokarst site into the cold lake. He explains:

“Permafrost has often been described as a ticking time bomb.” … “As that carbon get released, it’s now being exposed to biological and chemical processes that [it had] been kept away from for those thousands of years when it was frozen.” … “We are interested in understanding how much of the carbon that is right now in permafrost is going to eventually end up as CO2.” ~Jason Dobkowski

Carbon, nitrogen, and phosphorous are each elements that are incredibly important to life. Thermokarst events release these nutrients into soil and water, altering conditions for Arctic plants.

Vegetation takes in CO2 (carbon dioxide) from the atmosphere during photosynthesis. Unfortunately Arctic tundra plant growth, even in warmer temperatures, will likely not draw in enough CO2 to offset the vast amounts of carbon that will escape thawing permafrost with the help of sunlight and microbes.

Microbes are microscopic organisms. At thermokarst features they feed on plentiful newly-unfrozen organic matter, and in the process release CO2 (carbon dioxide) or CH4 (methane). They are small, but plentiful – they help turn ancient organic carbon (which could easily have been frozen for tens of thousands of years) into heat-trapping atmospheric gasses that impact us today.

The sudden abundance of elements that escapes from failed permafrost can foster more plant growth. In one study the Kuparuk river was purposefully fertilized to mimic the influx of nutrients. Aquatic plants flourished, which benefited the insect population and made a temporary boom in the population of graylings. The grayling is a small freshwater fish that is the staple of many diets. Local human communities, trout, grizzly bears, and migratory birds all feed on graylings. The extra nutrient influx at a thermokarst isn’t steady, though, and newly-shifted waterways can harm the grayling population, which requires stable deep-water freshwater wintering grounds. Changing waterway dynamics can also dramatically impact the huge numbers of migratory birds that come to the Arctic to feed, breed, and raise young every year.

We don’t yet truly understand how increasing numbers of thermokarst events will impact the ecosystem, but we know that they certainly will.

Thermokarsts cause big problems for Alaskans when thawed permafrost under buildings, roads, and pipelines collapses. Tilted houses, ruined roads and runways, and buckled railroad lines are big risks. In some places a combination of thawing permafrost, erosion and rising sea levels have forced whole coastal communities to move.

Human communities and businesses are impacted so strongly that Alaskans take precautions. Some buildings are constructed on poles and others on insulating pads to prevent the heat of the building from warming the underlying permafrost. There’s even a machine called a thermosyphon which draws heat from underground and vents it into the air above ground.

An increase in events

Breck Bowden, an ecologist and watershed scientist at the University of Vermont, Burlington, talked about the increasing concern about thermokarst events:

“In the past few decades, thermokarst incidents have doubled in some parts of the Alaskan Arctic. This correlates well with the doubling of permafrost temperature and a decrease in the stability of the tundra surface in the region. So the warming of the Arctic seems to be accelerating thermokarst formation.” ~Breck Bowden

Permafrost degradation and thaw is leading to an increase in thermokarst terrain. As ancient organic matter is reintroduced to the system and exposed to sunlight it has an immense capability to impact the global carbon balance, global warming, Arctic terrain and the health of Arctic ecosystems.

Toolik Field Station, a research base of operations active since the mid 1970s, gives us insight into Arctic processes. Although no one place can represent the entire circumarctic region, Toolik is located in a tundra/permafrost region that hosts both terrestrial and freshwater-aquatic ecosystems. Its terrain correlates well to terrain elsewhere in the Arctic, especially Siberia Russia and Western Canada.

Syndonia Bret-Harte, ecologist and plant specialist with the University of Alaska Fairbanks, has logged more than 15 summers at Toolik.

“Most of the changes that we’ve seen up here with warming are all things that would accelerate further warming,” she said. “Unfortunately, we haven’t seen very many changes that we think would act to slow down warming.” ~Syndonia Bret-Harte

At thermokarst sites, even small ones, carbon and other elements can flood the system so thoroughly and irregularly that they alter living conditions for organisms in the entire region.

What might a warmer world mean for us? Arctic climate change impacts widespread conditions in the Northern Hemisphere. These seemingly far-away changes can encourage extreme weather events, droughts, and floods.

“Melting permafrost is a canary in the coal mine, evidence of climate change,” said Bowden. “We are seeing more intense and rapid change in the Arctic than in any other biome on earth.”

“We hope to answer the question, if global warming continues, what will be the reaction of the landscape?” … “We’re not making a value judgment, but if there are consequences people would rather avoid, we’ll tell you what will happen if you don’t take steps now.” ~Breck Bowden